Sean and a brother were sent off to prestigious universities in luxury cars at the height  of the depression.  This was a young man who did not have to go to war.

World War Two started in September 1939 when Germany invaded  Poland. America's war did not start until Japan's attack on Pearl Harbor at the end of 1941.

This was a man who could stand up to terrible fear, tension  and do ruthless things in order to prevent others from doing far worse .

Born in Perth Australia his family moved to Washington D.C. when he was one year old. He was raised in comfort about half a mile from the Vice President's mansion and had a  couple of senators in the neighborhood .

Sean was proud of his wartime accomplishments but would not talk about it except with a fellow air force vet or with me , something that drove my mother crazy .

Sean spent most of his working life as a purchasing agent .

He was a polite, straight forward  person who loved kids, golf and puppies but never lost a very intense dislike of the Germans . 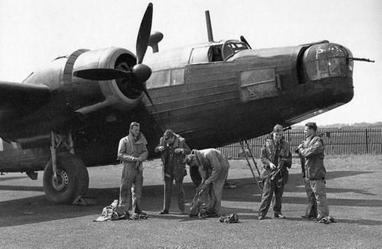 In his last couple of years he was starting to open up about the war and I was planning to get some some in depth stories about the war but to my great regret time ran out before I could get to the project .

Their only child Tom was born August 1952 in Toronto.

His mother was a nurse turned homemaker . His father was an accountant and businessman who by depression standards made a fortune . He would recover property or get large amounts of compensation for land or mining claims etc that the federal government had seized during WW1 and would not return.

After the war he completed his B.Sc  degree at McGill university in Montreal .

Long before America was drawn into the war, Sean and thousands of other young Americans came north to fight for freedom. He joined the Royal Canadian Air Force in Toronto  during October 1940.

Airmen prepare for a mission in their Wellington  bomber.

My Dad Sean Dunn flew with the RCAF and the RAF as part of Bomber Command in the 1940s. This website is an historical account of this part of the Second World War and a tribute to him and the brave men and women who served during that time.